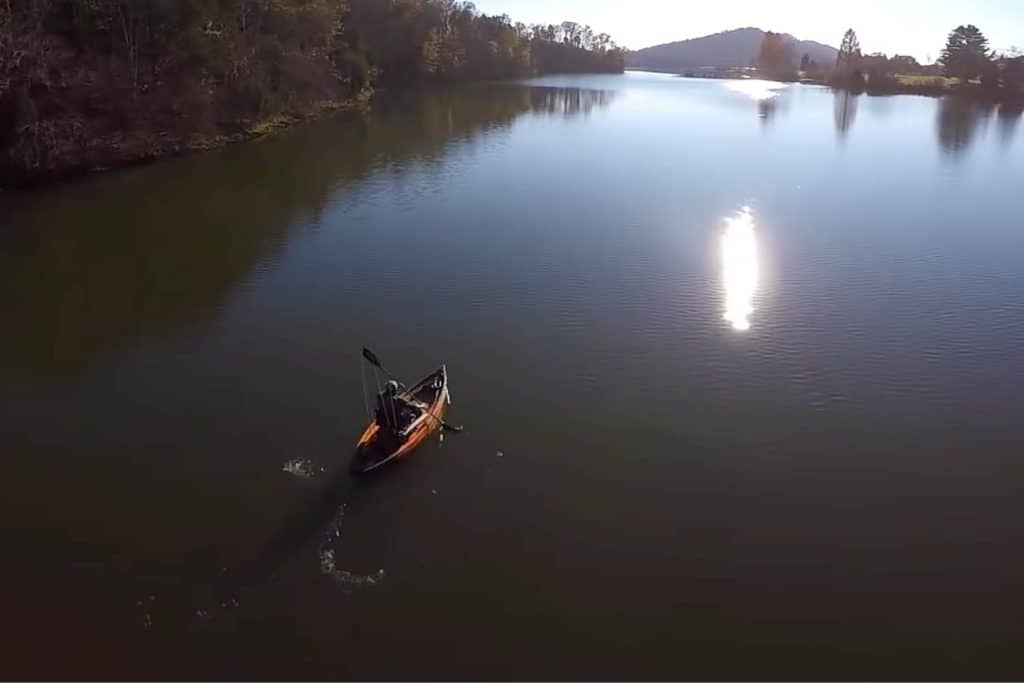 Kayak fishing is massively popular in the US, and its popularity is only getting bigger with every passing day. The majority of kayak fishermen tend to use traditional kayaks, with their hard bodies and familiar surroundings, however more and more people are now turning to inflatable fishing kayaks, for a number of different reasons.

Perhaps the main reason why people opt for an inflatable kayak over the more traditional design is this: they are so easy to transport! A standard kayak needs to be strapped to the top of a car, or even towed in a trailer, while an inflatable kayak simply rolls up and fits into a bag, which can be carried around easily. You can even take them on public transport without any hassle!

They are also incredibly light, meaning that even the weakest of kayakers will be able to handle them easily. In fact, it’s perfectly feasible that a person could lift them with one hand – try doing that with a standard fishing kayak!

Finally, inflatable kayaks are incredibly stable, and are often perfect for those with a fear of tipping over in a standard kayak. You might think that they are susceptible to damage, but this is not the case, as they are usually made with high-quality components. Of course, punctures can happen, but they are easily fixed and won’t completely destroy the whole kayak.

Inflatable kayaks come in a huge range of different designs, however the most common are sit-on-top and sit-in fishing kayaks. This variety means that everyone should be able to find exactly what they need when they are shopping for an inflatable kayak online! To give you a little help though, you’ll find a list of the five best inflatable fishing kayaks below… 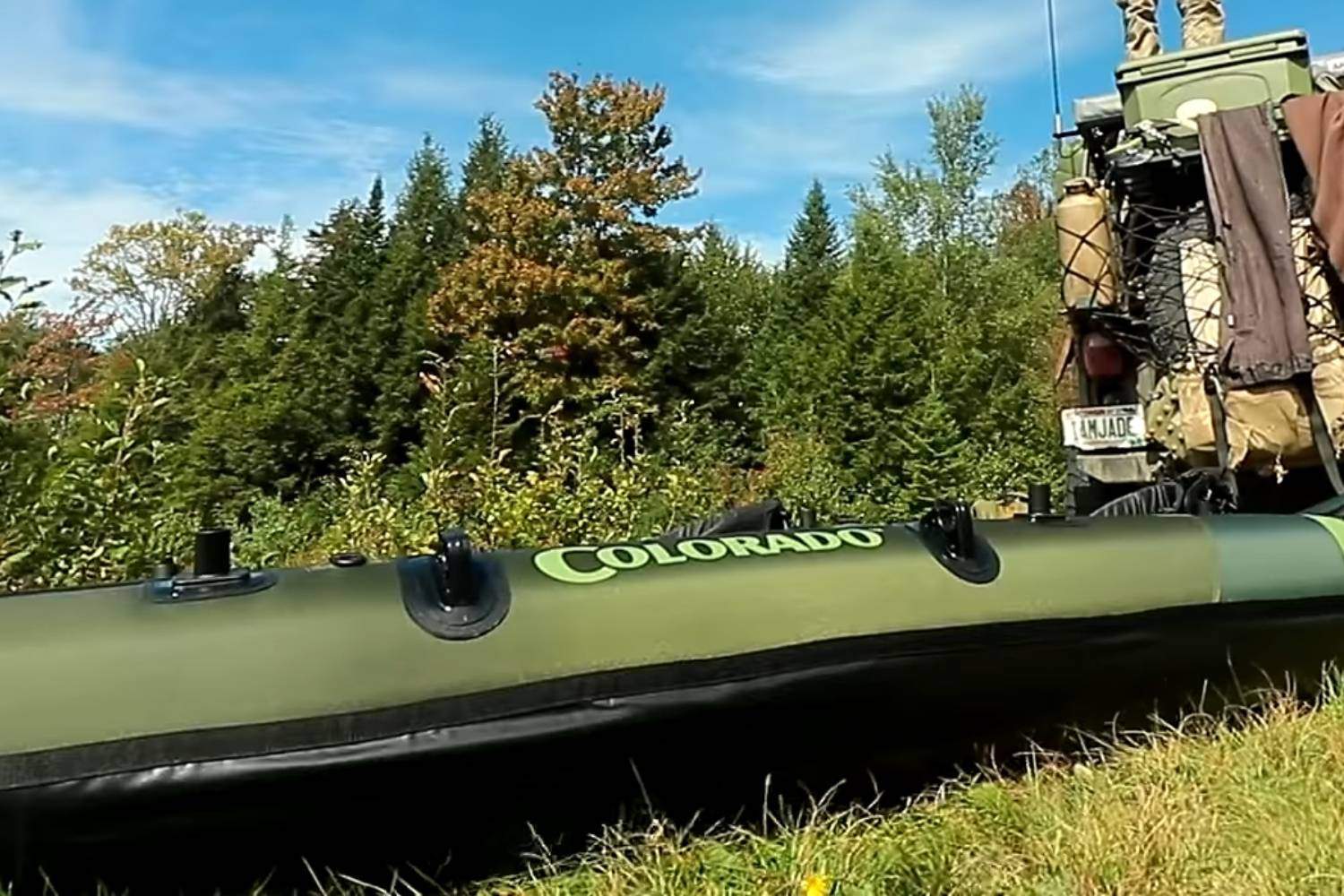 The first inflatable fishing kayak on the list is for more sociable anglers, as it is a fishing kayak designed for two people. This means that it’s perfect for those looking for a social day out on the water, as opposed to a solitary fishing experience. It isn’t particularly cheap, as it has a list price of over $500, however you get a lot for your money, including an incredibly rugged construction and multiple air chambers, meaning that a puncture won’t cause the entire kayak to deflate.

There’s space for a trolling motor to be added, plus paddle holders ensure that your paddles won’t get in your way as you fish. There are also two rod holders, designed so that you can fish hands free. Finally, but no less importantly, this is a kayak built with comfort in mind, as the seats are some of the most comfortable you’ll find anywhere! 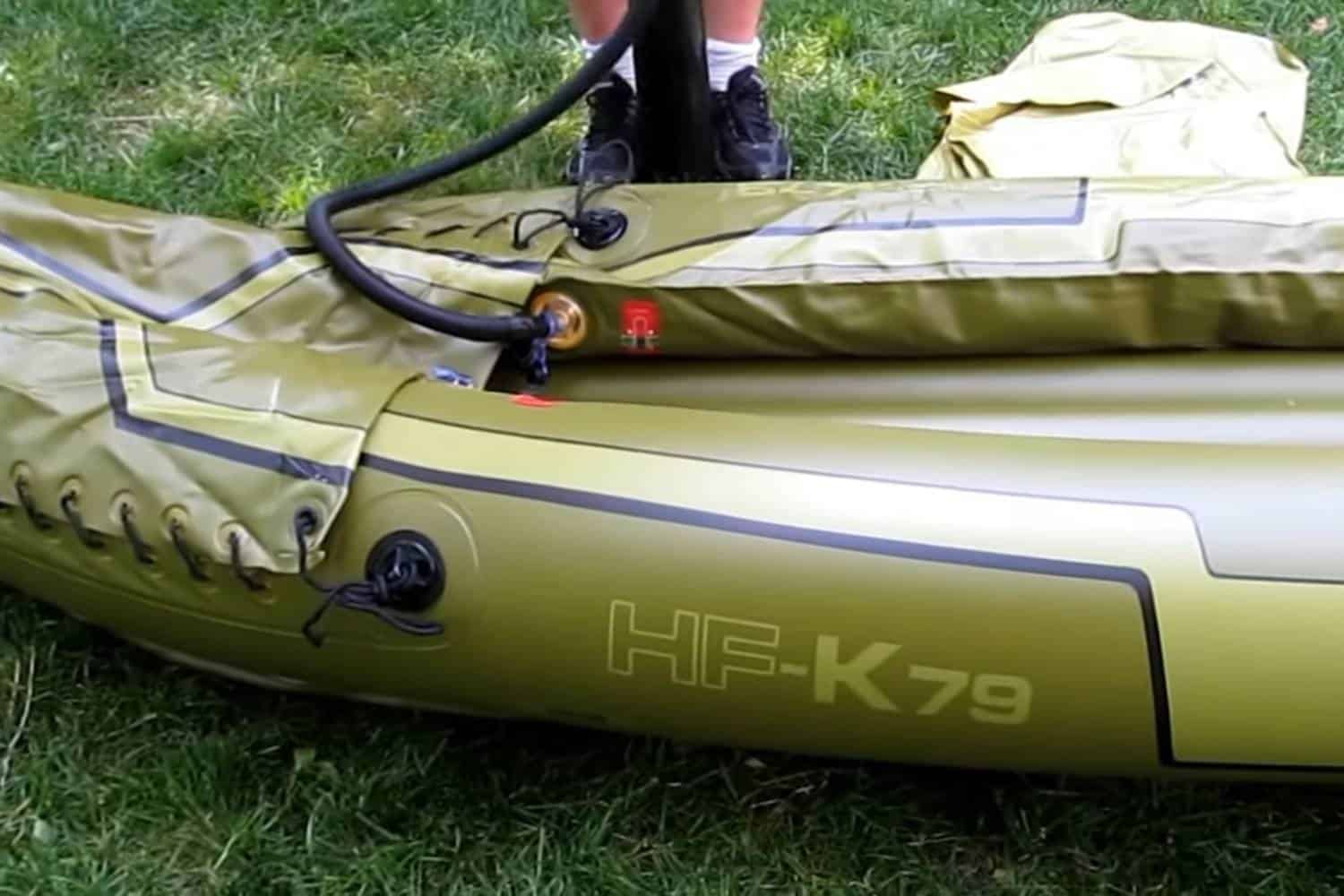 The Sevylor Tahiti Hunt and Fish is another kayak designed for two people, however this one is going to be slightly more affordable for the majority of people. Despite the cheaper price, it is still incredibly rugged though, thanks to the PVC construction, and is perfect for use on lakes. Like the previous kayak, it also has protection against punctures, as well as an Airtight System, which is guaranteed by the manufacturer not to leak.

The seats on this kayak are adjustable, ensuring you can fish in comfort, while the spray covers make sure you are not constantly splashed by water when you fish. It comes complete with a carry bag, and is easy to carry even when inflated, thanks to the attached handles. This really is a great inflatable kayak for those not wanting to spend huge amounts of money! 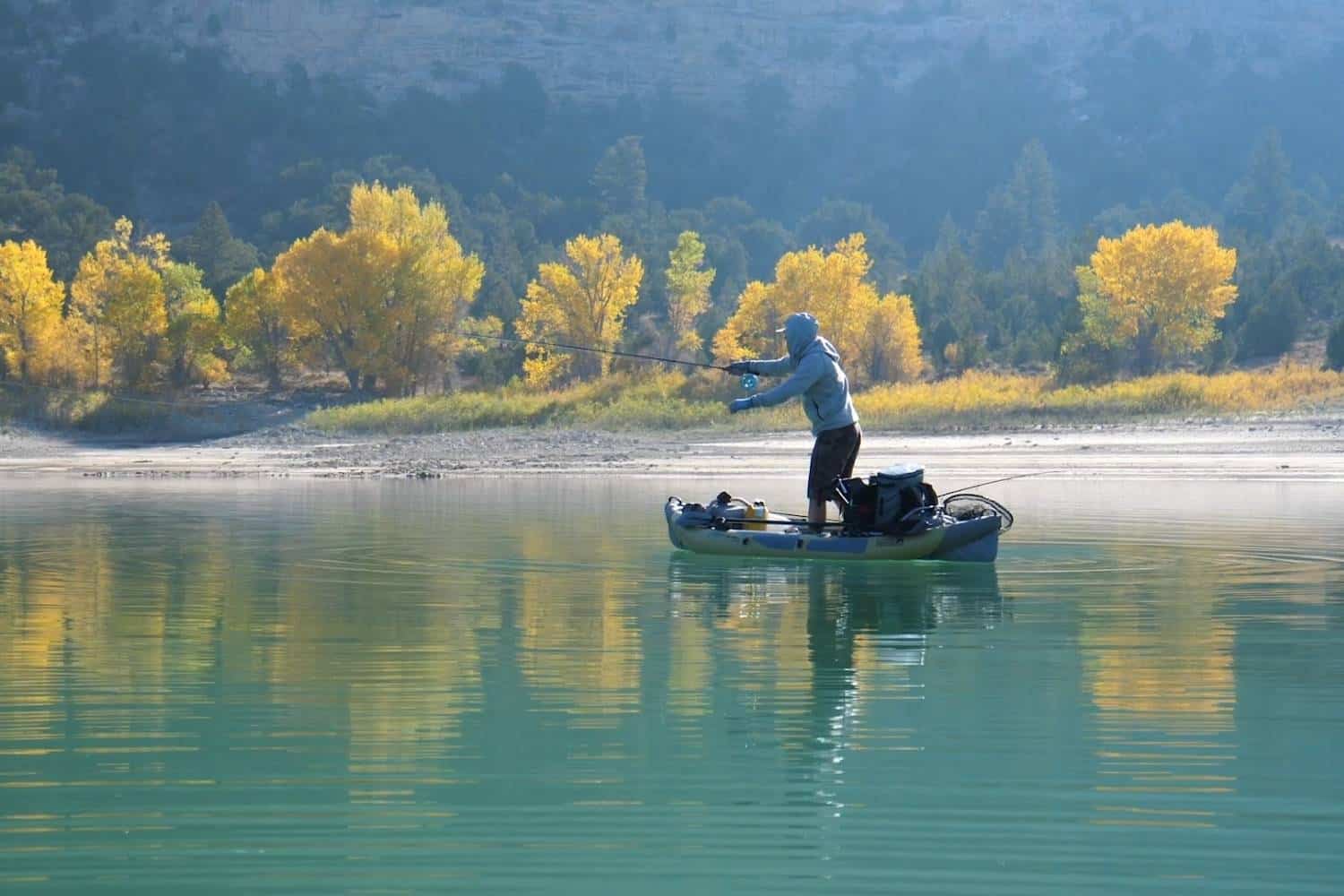 This inflatable kayak, designed for one person, is one of the more extravagant ones on the market, as it features almost everything you could ever need. With a recommended price of $750, it’s not going to be right for everyone, but more serious kayak anglers will be immediately drawn to it. It has an aluminum rib frame for maximum strength and stability, while the material used is designed to be strong and resistant to damage.

This kayak is also insanely comfortable, with a high-backed seat and inflatable lumbar support. It also has a removable mounting rail, and you can also easily add aftermarket mounts to completely customise the layout of this kayak. If you’re looking for an inflatable kayak that can do it all, this could well be the right choice for you! 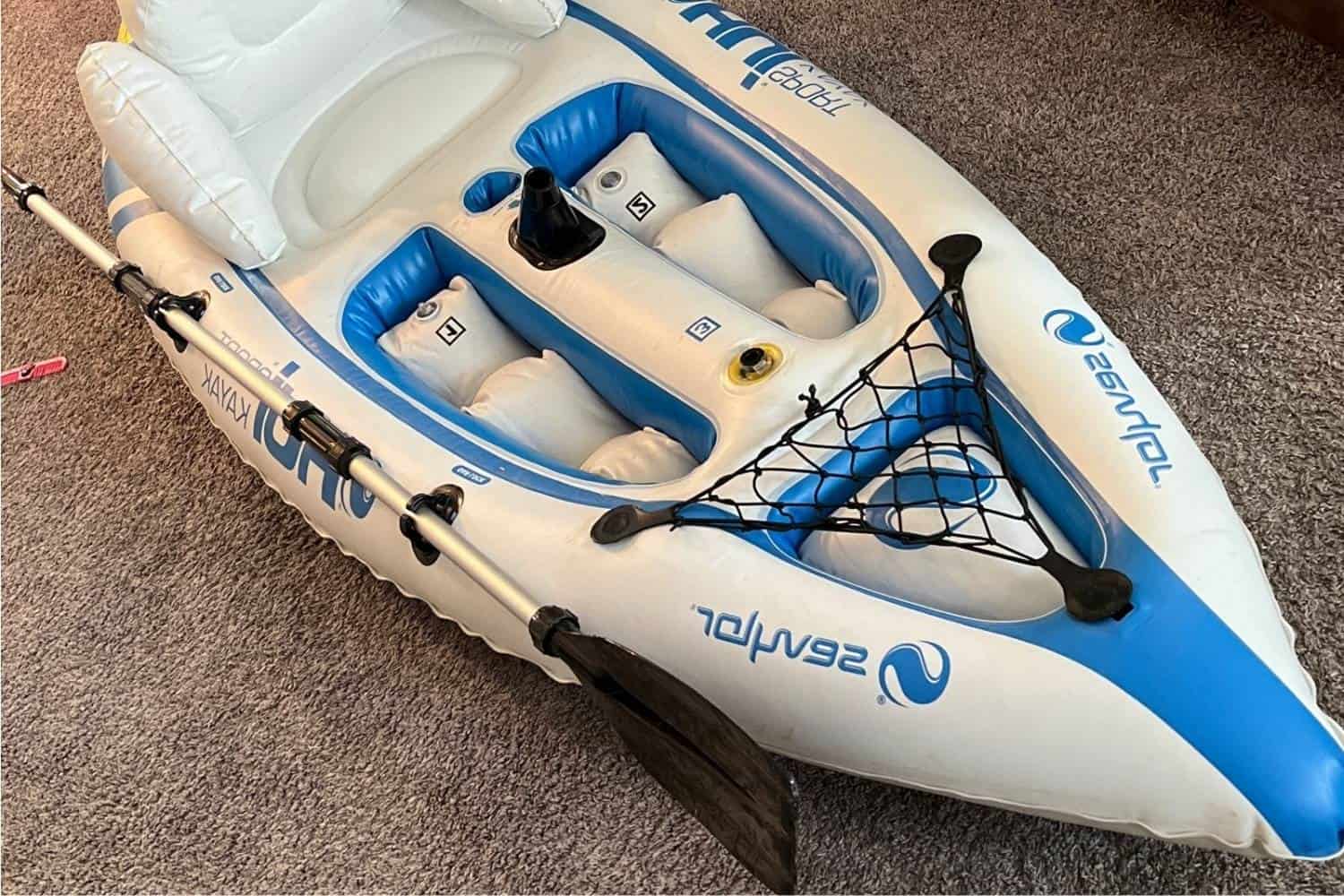 So far most of the kayaks on this page have been quite expensive, but this one is at the other end of the scale, as it can be bought for less than $100! This means that it’s the perfect kayak for beginners, looking to fish in lakes and calm rivers. It doesn’t come with a huge number of different features, however it has a fishing rod holder and a comfortable seat, so what more could you ask for?

Just because this kayak is affordable, it doesn’t mean it isn’t strong though. It’s constructed using 22-gauge PVC to provide maximum strength, and it can hold a maximum of 400lbs, which is extremely impressive. In fact, that’s more than some of the tandem kayaks out there! There’s also a small area to store items at the front of the kayak, as well as a stringer attachment. This is the perfect kayak for those looking to get a taste of the sport, before then progressing onto something a little bit more expensive. 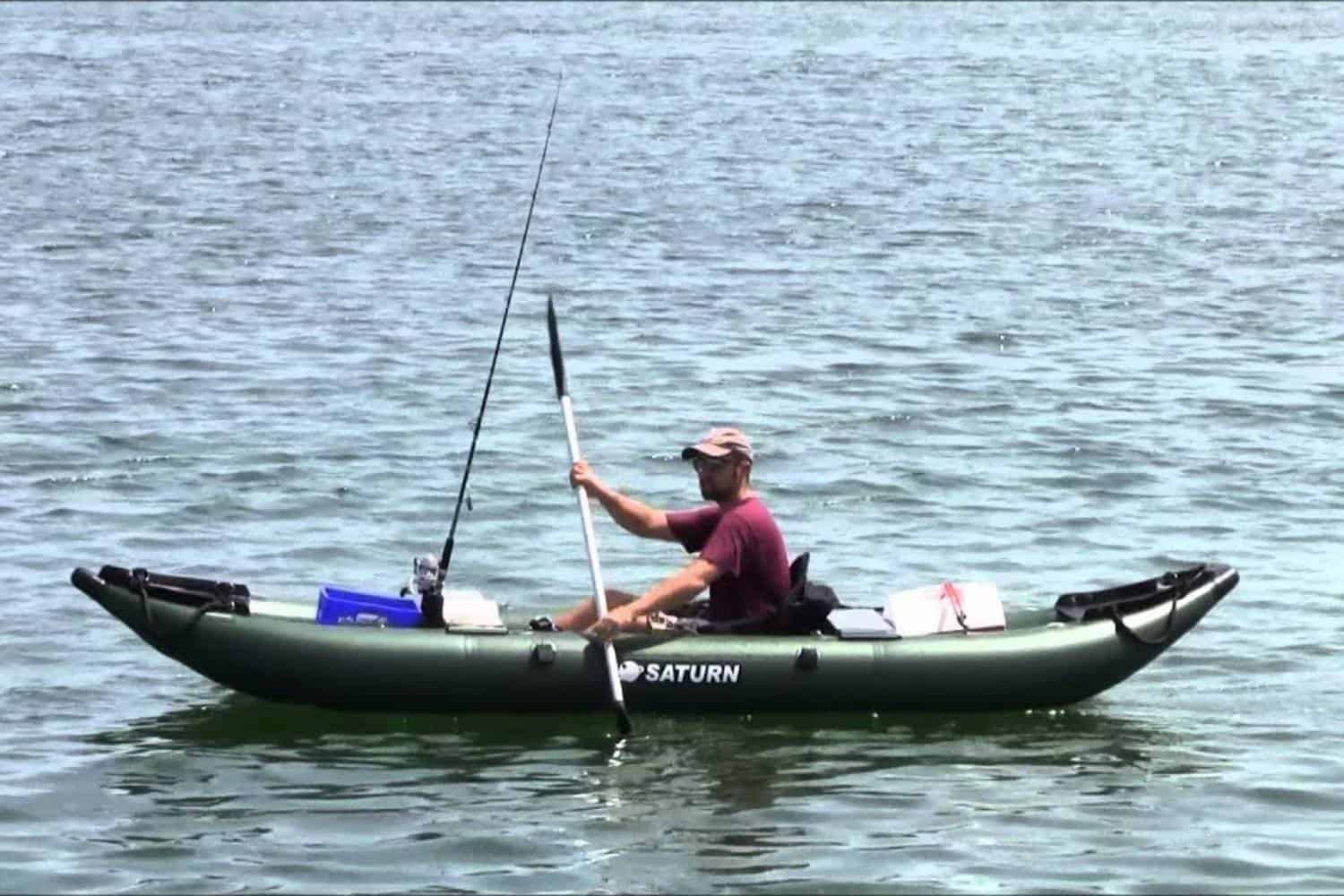 The Saturn 13ft Pro Angler certainly looks like it means business, as it doesn’t have any of the garish design features or bright colors associated with most other inflatable kayaks. What it lacks in looks, it more than makes up for with features though, as this is one of the most complete inflatable kayaks you’ll find on the market. When inflated, you’ll see that this kayak has a bevy of different features, including two removable aluminum mounts, comfortable seating and large amounts of strorage.

Like the other kayaks on this list, the Saturn 13ft Pro Angler is also incredibly strong, and it is also very stable. In fact, the manufacturers boast that you can even stand up to fish in this kayak, should you want to! With a price of around $700 it’s certainly quite expensive, but the price is still very much worth it.