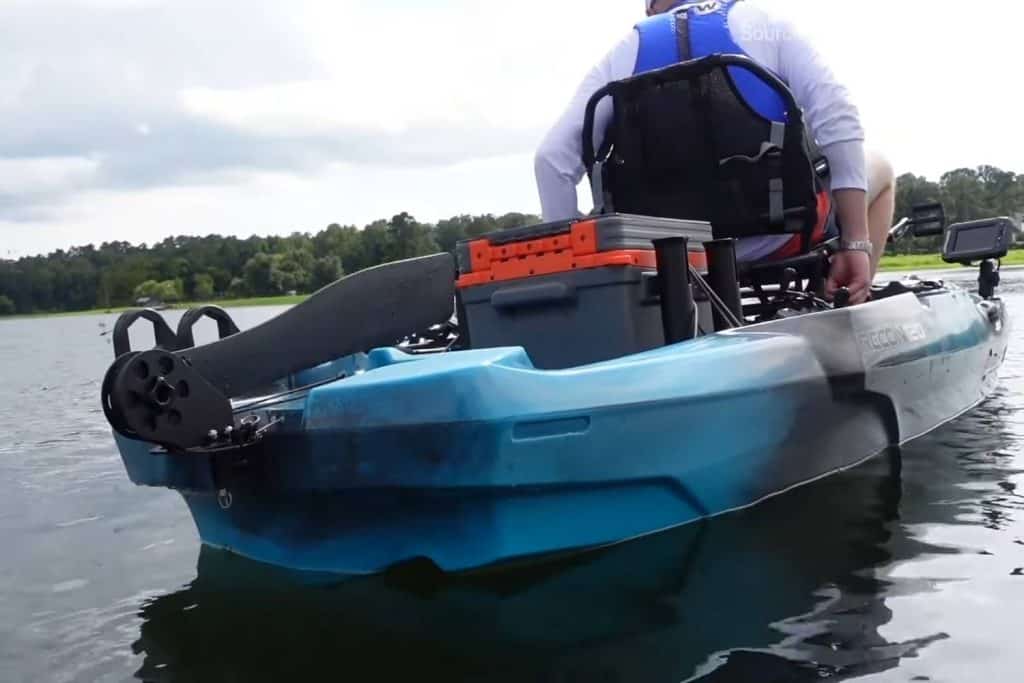 One of the most important decisions to make when buying a fishing kayak is this: should you purchase a sit-in fishing kayak, or a sit-on-top fishing kayak? There are those who extol the virtues of each design, and both are perfectly capable of standing up to the rigors required of them, however this article is focused on the sit-in variety, which is the type selected by the majority of keen fishing kayakers.

Sit-in fishing kayaks and sit-on-top kayaks share a number of identical features, however there is one feature that marks them as different. Sit-in kayaks enclose the kayaker in a protective space, with the sides of the kayak rising up slightly around them; sit-on-top kayaks are exactly as the name sounds, as the user simply perches on them and has less support.

But what are the benefits of choosing a sit-in kayak over a sit-on-top kayak? Well, there are a few, including:

There are a number of fantastic sit-in fishing kayaks on the market, designed to appeal to kayakers of all levels and budgets. Below you’ll find five that come recommended, thanks to a number of different reasons…

This is a great sit-in fishing kayak, and is favored by many keen kayak fishermen. It comes complete with two flush mount rod holders, as well as a swivel rod holder, plus it also has an exceedingly comfortable seat – which is perfect for long, lazy days out on the water! It also comes in the choice of two colors – sand or olive green, although you should remember that the olive green design is much more expensive.

The Sun Dolphin Excursion has a number of technical features that also make it a great choice. The polyethylene hull ensures that it remains strong at all times, and can stand up to any challenges thrown at it, while the large cockpit has adjustable foot braces, to ensure you get the best possible paddling position. This kayak has a maximum capacity of 250 pounds, which should be more than enough for most kayakers. 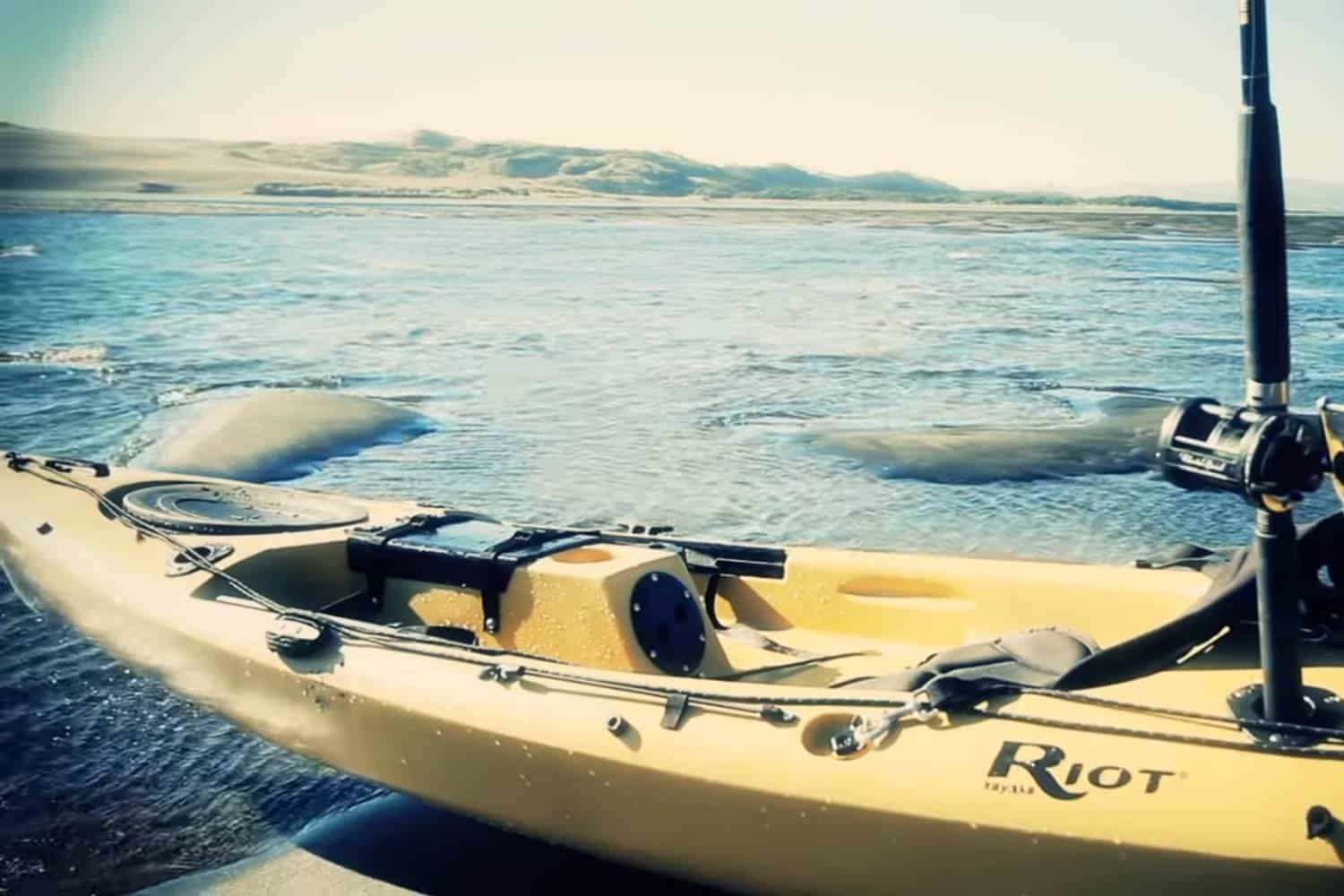 This is a kayak for serious kayak fishermen, as it is not as cheap as some of the other models found out there. It is more expensive for a reason though, as it provides the ultimate in performance, comfort and usability. What’s more, it’s also the perfect kayak for those going on longer expeditions, as it has more than enough room to store camping equipment, as well as all of your fishing gear too. Long days in the kayak will be made more comfortable by the great seating, which can be adjusted to suit your personal requirements.

But what about the fishing? Well, this kayak has three rod holders, so you can triple your chances of landing a fish. What’s more, its design will allow you to move seamlessly and quietly through the water. All in all, this is a great kayak for avid kayak fishermen. 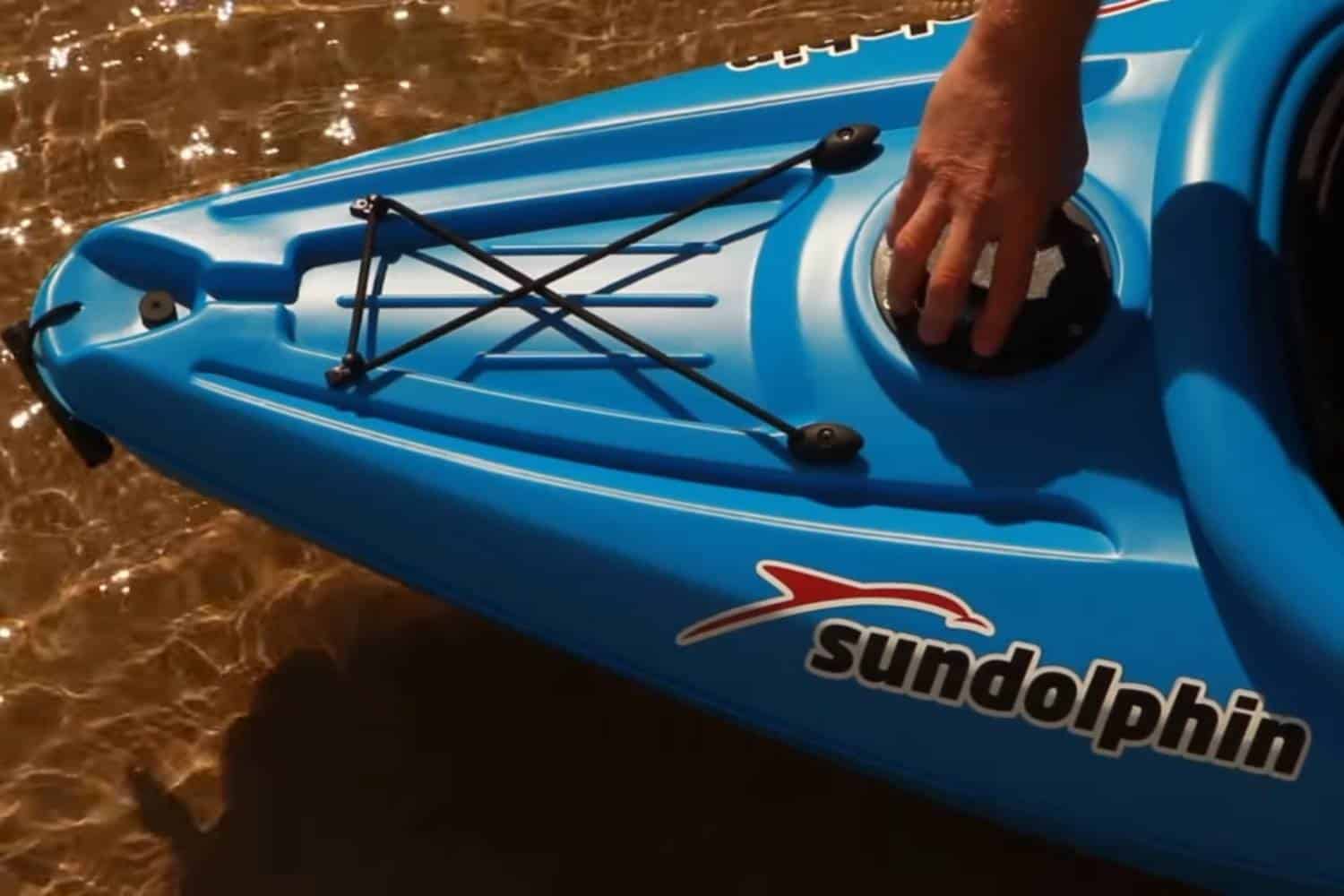 The Aruba SS is another great kayak from Sun Dolphin, who are known for creating kayaks that both perform well and don’t damage the wallet too much. Its bright blue design immediately draws the eyes to it, but the real beauty is in the way this kayak handles, as it tracks and paddles absolutely fantastically. It also comes with flush mounted fishing rod holders, as well as adjustable foot braces.

Like the previous kayak, you should have no problems storing all your kit in the Aruba SS, as it not only comes with a large storage compartment, but also comes with a P.A.C. (Portable Accessory Carrier). This can be towed behind the boat, or used as a backpack. This really is a great sit-in fishing kayak for those who don’t want to spend really big money. 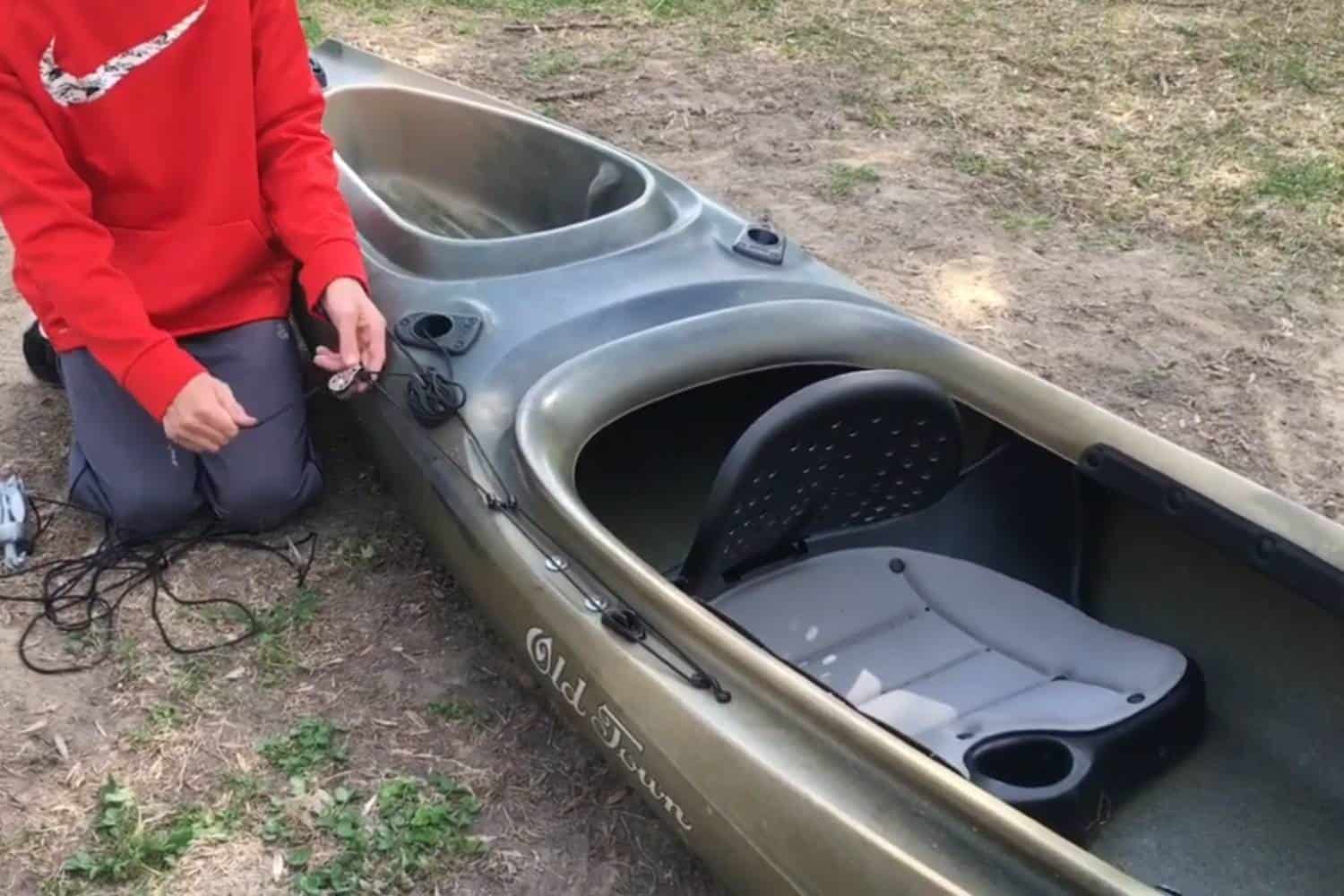 Old Town are known for being experts when it comes to creating kayaks, and the Vapor 12 Angler is one of their best creations to date. Two behind-the-seat flush mounted fishing rod holders anchor your vital equipment securely with a trolley system, while the incredibly spacious cockpit contributes massively to the comfort of this kayak. There’s even a cup holder, so you don spill your drink when you’re wrestling with a big fish!

The material used to create this kayak is only of the highest quality, meaning that it’s not only incredibly strong, but also tracks and paddles perfectly. The price isn’t as high as you might think either, making it the perfect all-rounder. 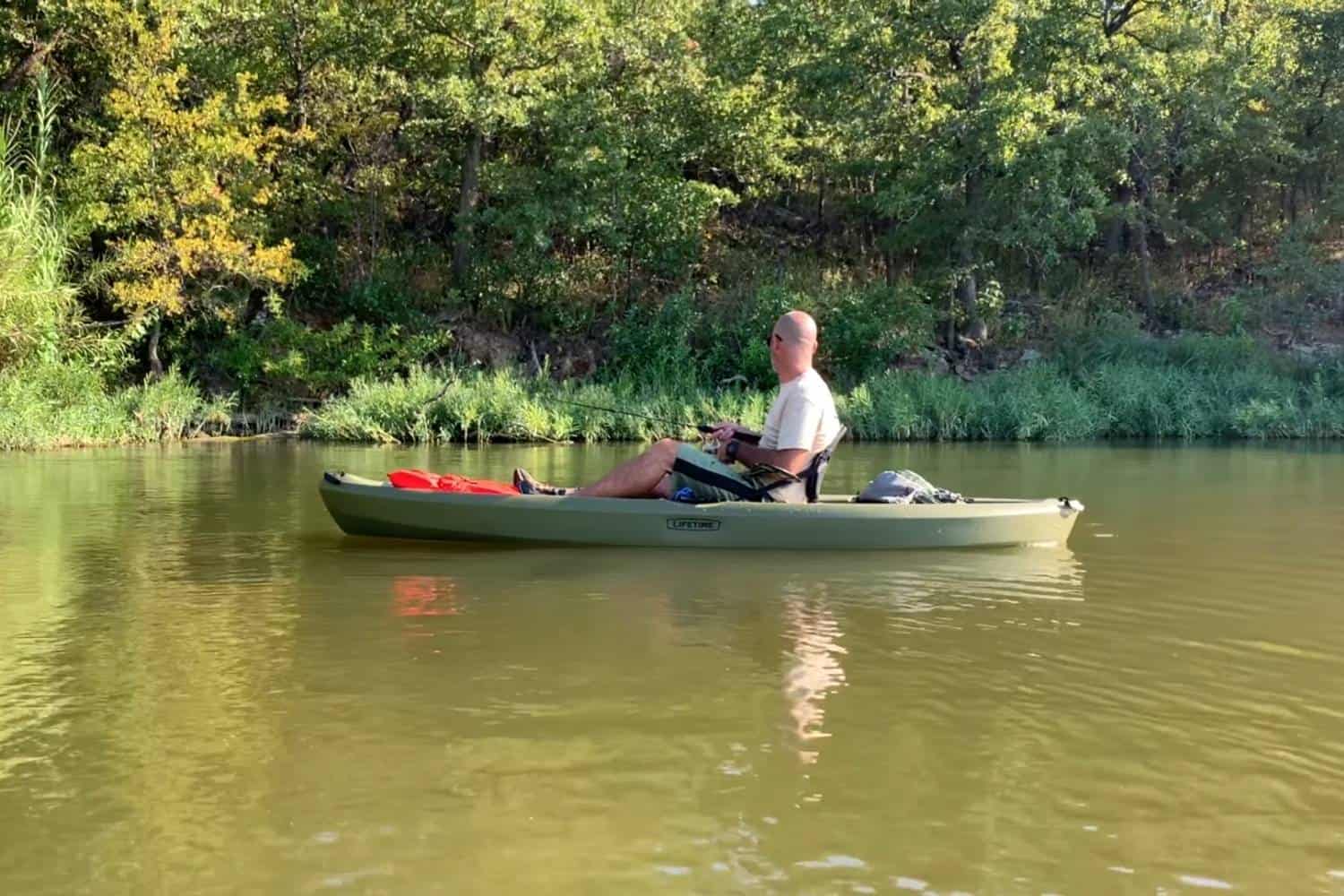 The final sit-in kayak on the list is the Lifetime Redfin Angler, which doesn’t look too special but certainly punches well above its weight. With a padded seat, cargo hold, two mounted fishing rod holders and a large cockpit, it offers everything a kayak fisherman could need. What’s more, it also has multiple foot rest positions, therefore enhancing your comfort and performance.

Many people like this kayak because it is incredibly lightweight, therefore making for easy transportation and use. The fact that it’s lightweight doesn’t mean that it isn’t durable though, as this kayak is made from polyethylene and is UV-protected, meaning that it won’t crack or fade. If you value performance over looks, this kayak could well be the perfect choice!