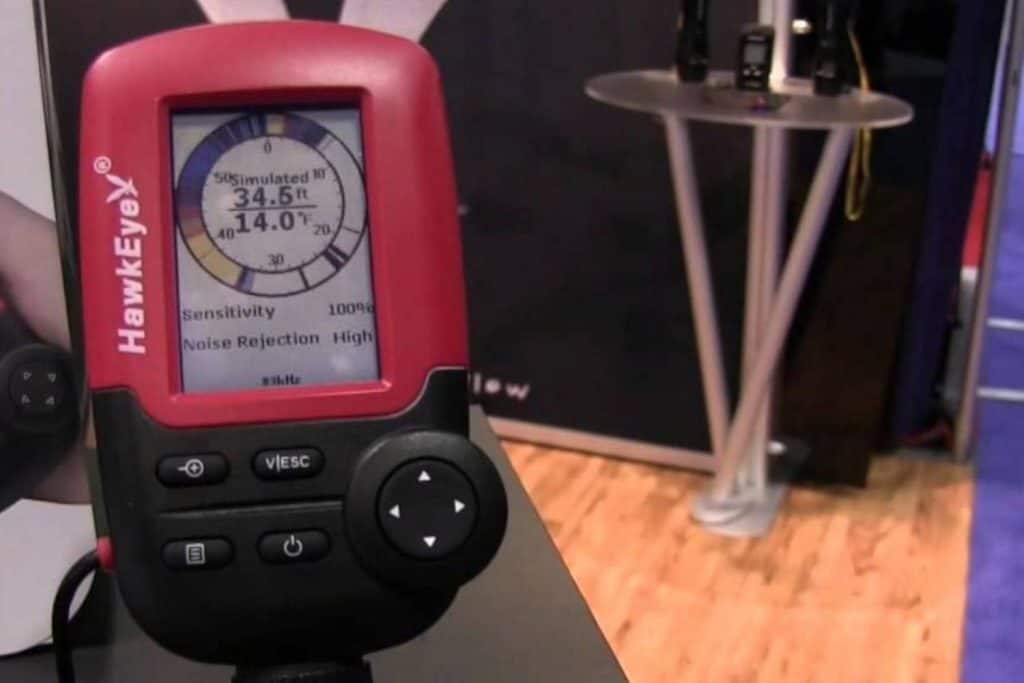 Most of the portable fish finders that I’ve reviewed on Fish Finder Source are decently portable but with one tradeoff or another. Either the unit is a full fish finder, but rather clunky, or the transducer is very mobile and can be used with an app, but obviously cutting back a little on reception and SONAR return quality.

From the way the features read, the Hawkeye Fishtrax series blows all of the other portable models out of the water – pun intended.

Just slightly bigger than a small smartphone, the Hawkeye Fishtrax series measures at 6 inches long by 3 inches wide by 2 inches deep. It fits snugly in the palm of your hand, and is powered by 4 AAA batteries that can last up to 30 hours. No more fiddling around with large 12V marine batteries!

Lots of features in a tiny package 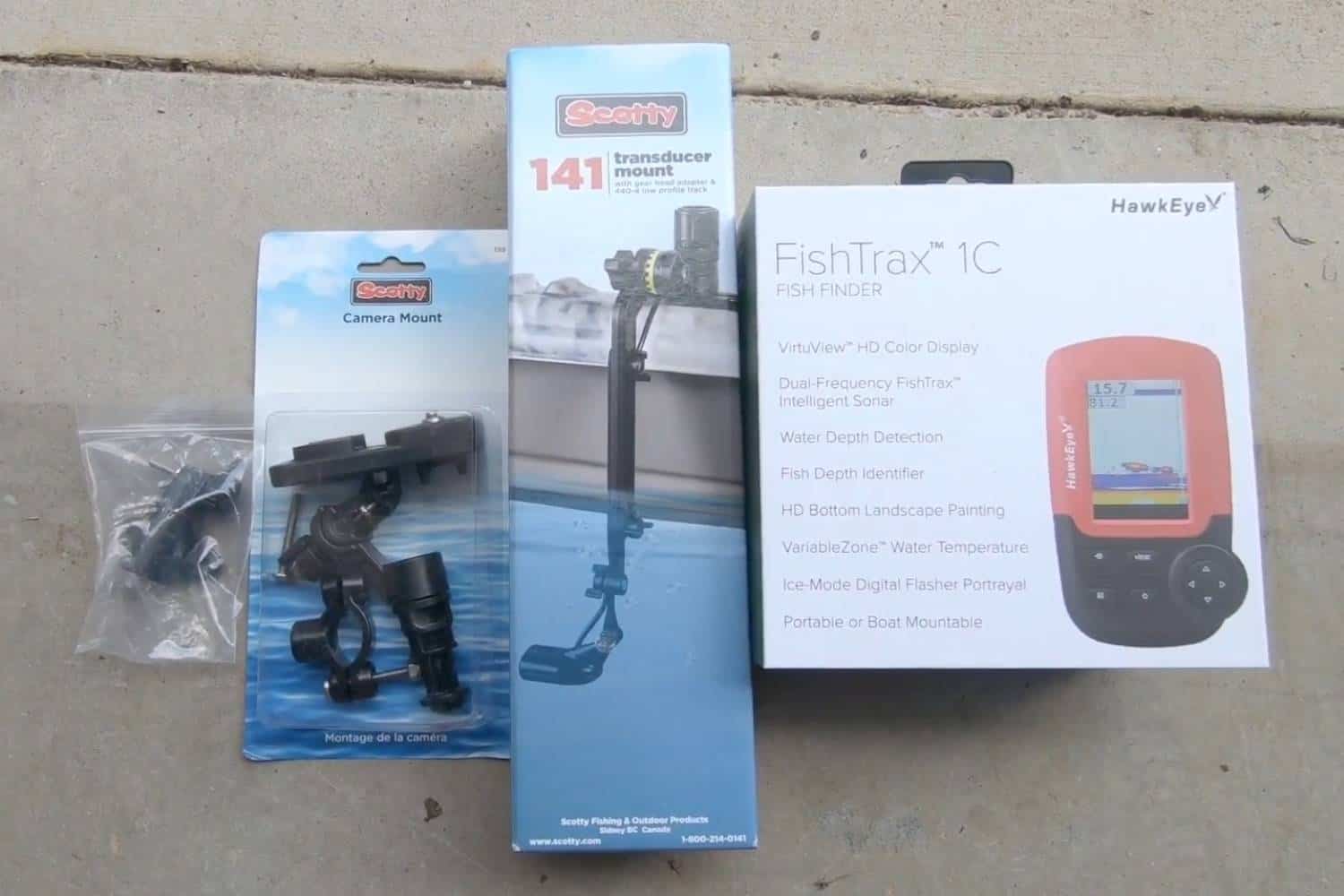 Even though it’s so compact, Hawkeye has managed to fit a full-featured fish finder into the FishTrax fish finder. All three models come with a fully featured transducer that can either be used as a floating unit for shore fishing, a trollableunit, or a transom mounted unit. It can even work for ice fishing.

You’ll get the transducer in the box, and optional accessories will let you mount the fish finder however you want.

The FishTrax operates on 2 frequencies – 83 kHz for deeper water and 200 kHz for shallower water and better picture quality. You can get readings from as shallow as 1.5 feet all the way down to 240 feet, which is more than enough for most fishing. This unit won’t work well in saltwater, though.

You can also adjust SONAR sensitivities like you would on larger fish finders. There are a wide variety of presets you can choose from. Lower sensitivity will remove clutter and give you a better bottom picture, and show you large objects such as structure and large gamefish.

Higher sensitivity will show you a lot more detail but may clutter the screen a little bit – this sensitivity will probably be used by seasoned fish finder experts. However, there are also modes in the middle which you can use for everyday fishing.

The features I listed above are in all versions, so now lets look at how the three versions differ. 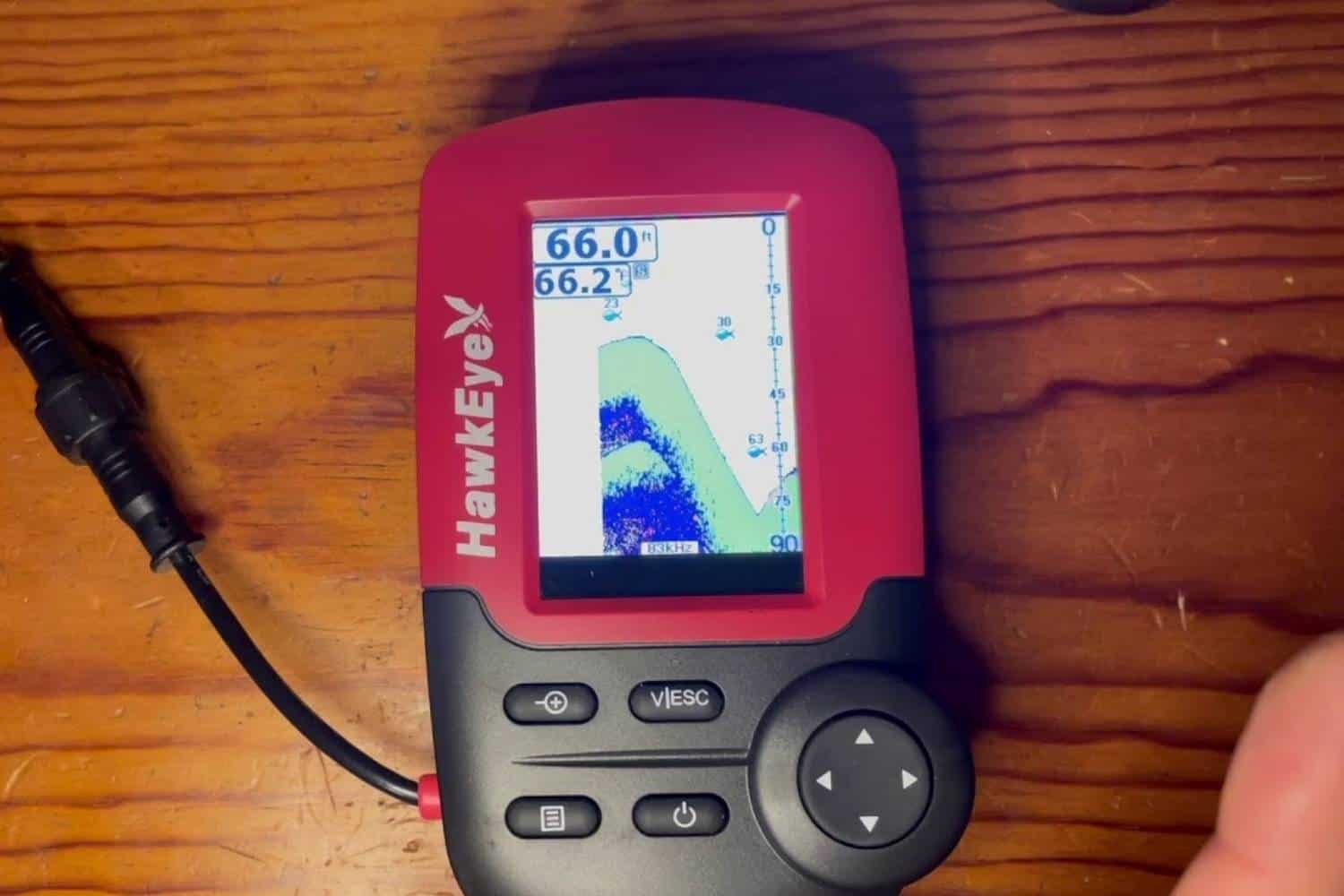 The FishTrax 1 is a very basic fish finder with an icon display. The FishTrax 1 has 5 preset sensitivities which will show you varying levels of detail. Instead of SONAR returns, you’ll actually see what the fish finder software thinks each return is – a rock, a weed, a fish, or some other underwater object. There’s no way to turn this feature off, and this is the only way you’ll see the returns.

As such, the FishTrax 1 is only suitable in my opinion for very basic angling and if you are just getting started. For just a little higher investment, you can get the much more robust FishTrax 1X or FishTrax 1C.

The FishTrax 1X is a step up from the FishTrax 1. This model has a dot-matrix display(black and white) which lets you see SONAR returns as proper waves and blobs. Alternatively, you could let the fish finder’s software determine what the returns should be and display icons, too.

This version has 10 pre-set sensitivities, greater than the FishTrax 1. You can also set the depth range automatically, where it will determine what to show depending on how deep the water is, or if you want more control, you can set it yourself.

If you set it yourself, bear in mind that it will only show you the returns for what you have set. So if you are in 100 feet deep water, but set the depth range to 20 feet, you’ll only see returns for the top 20 feet, nothing else. 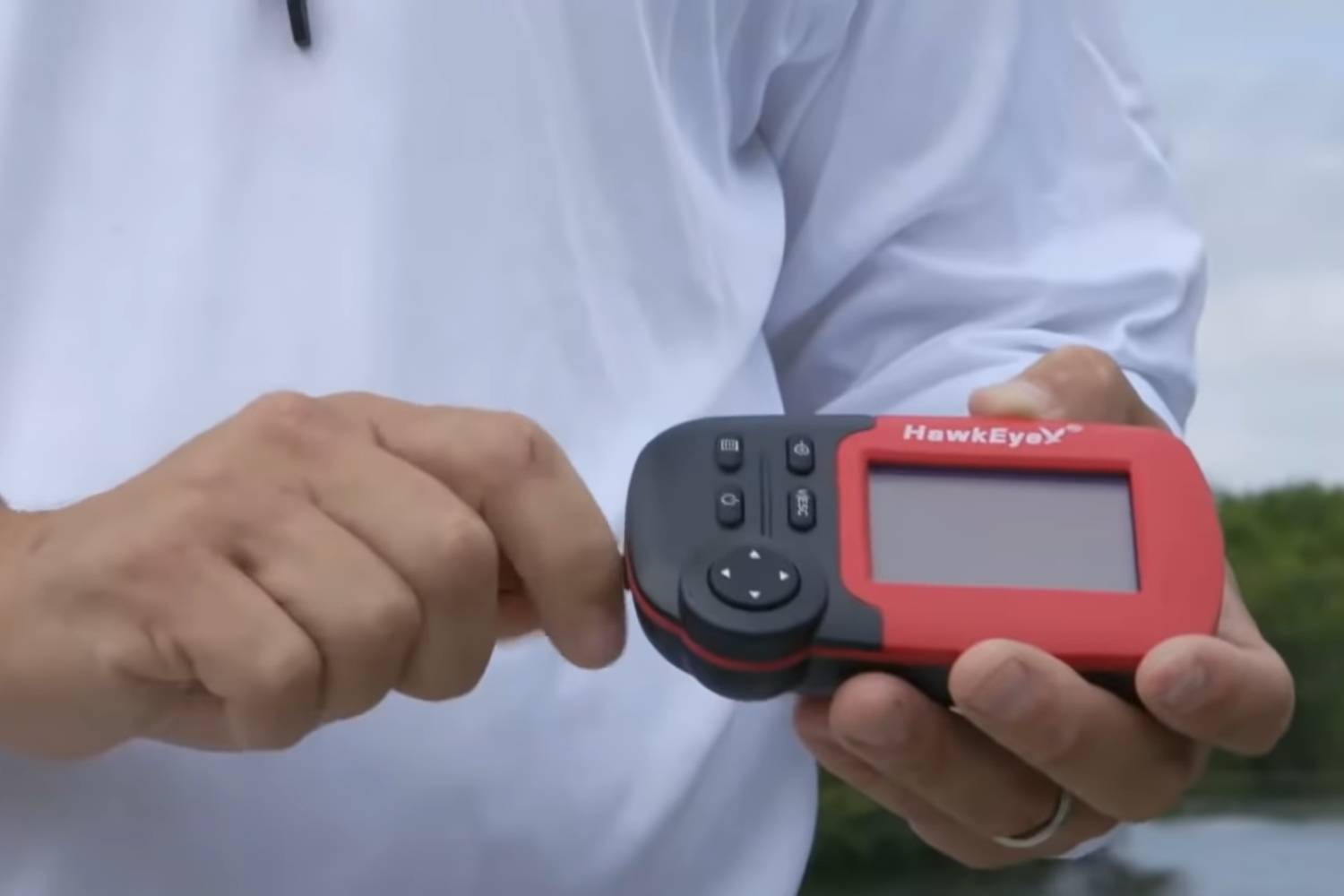 Finally, the FishTrax 1C is the most powerful of the lot. It has a full color screen which will show you returns in brilliant color, and can also function as an ice flasher for winter fishing.

The FishTrax 1C has 100 sensitivity settings for you to choose from, giving you unmatched accuracy and freedom. It operates on 3 modes:

For kayak fishing or shore fishing, the amount of value your dollar buys with the FishTrax models is unmatched. However, no fish finder is perfect. There have been reports of the battery life being much lower than advertised, with some customers only getting 4-5 hours. The screen is also not very fast in refreshing, so when you switch between sensitivities, there is a bit of a lag before you get a good reading. However, compared against larger Humminbird fish finders, the fish targeting was spot on. For the price and extreme portability, you really can’t complain.